The versatile hall is frequently used for parties, quiz nights, fetes, wedding receptions and Christmas Fayres as  well as for talks and stage performances by village organisations. 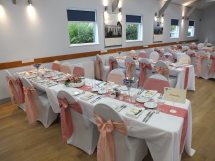 In addition it doubles as a polling station and is regularly used by groups such as the Bowls, Explorer Scouts, Macklin Dance Studio and the Baby and Toddler Group. It also has one of the three village AED (defibrillators) located on an external wall.

The Village Hall Trustees are responsible for the upkeep of the building and grounds, as well as running the 100 Club and other events.

The Village Hall caretaker, Paul Whitby, can be contacted for bookings of the main hall and the small annex/meeting room on T: 02476 544279 – once the availability has been confirmed download the booking form and return it completed to Paul.